We have three amazing programs for you to choose from! Find the one that fits you. 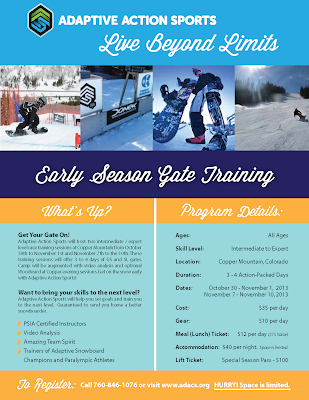 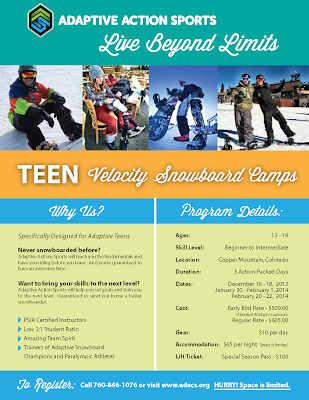 Why us?
If you have never snowboarded before or want to bring your skills to the next level AAS has you covered. AAS will teach you the fundamentals and have you riding before you leave. And you’re guaranteed to have an awesome time. We will help you set goals and train you to the next level. 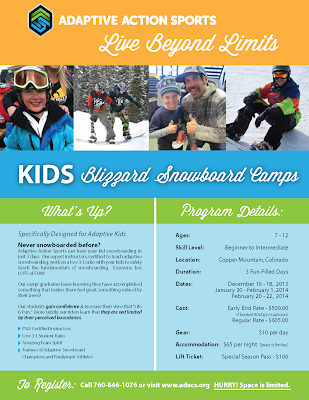 What’s Up? Never snowboarded before?
Adaptive Action Sports can have your kid snowboarding in just 3 days. Our expert instructors, certified to teach adaptive snowboarding, work on a low 3:1 ratio with your kids to safely teach the fundamentals of snowboarding. Everyone has LOTS of FUN!

Our camp graduates leave knowing they have accomplished something that makes them feel great, something valued by their peers! Our students gain confidence & increase their view that “Life is Fun.” More subtly, our riders learn that they are not limited by their perceived boundaries.

Thanks for having me out to the USASA Summer Summit. Vegas baby!!

Adaptive Action Sports is truly grateful for everything that USASA has done for us over the years. Because of your compassion and dedication to the adaptive snowboard community we are now on our way to the Paralympic Games.

We are looking forward to many more years to come.

Please follow this link to find the closest DSUSA Chapter to You! 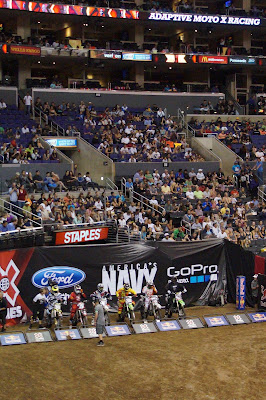 Staples Center was filled to the brim.  In the pits leading up to the race, tension was thick and nerves tight as the riders prepared to race. During three practice rounds, it was hard to determine how the race would play out.   Off of his second place finish at the Extremity Games, newcomer Max Gomez was looking fast.  Event veterans Chris Ridgway, X Games gold medalist, and Todd Thompson both rode strong and were poised to give Mike Shultz, favored to win, a run for his money.  Unfortunately, Jim Wazny, a single above knee amputee and veteran to X Games Moto and Snocross, lost his front brake coming off the 65 foot ramp jump resulting in a crash that took him out of the main event. 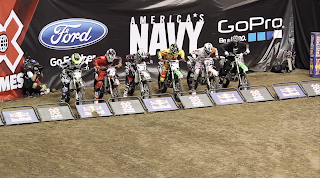 Engines fired, lights and music came up and the announcer called “Are you ready,  Staples Center….!!?” The crowd erupted just as the gates dropped and the racers cut loose. Ridgway and Shultz broke the fastest but it was Ridgway who took the hole shot with Shultz and Thompson just on his wheel.

Ridgway led the race for the first four of a 12 lap race before being overtaken by Shultz in a dramatic pass. Thompson would also pass Ridgway for second place but not before Ridgway defended his line with fierce conviction. Shultz, Thompson and Ridgway led the race in that order and crossed the line the same way.  Max Gomez raced a strong race and finished fourth followed by Howe. Turner had a brake cable malfunction mid-race that kept him from the checkered flag.

The race was a phenomenal success and a truly amazing show. We are looking forward to X Games Austin in 2014 for another year of amazing adaptive racing.

For more information on AAS and X Games, visit www.adacs.org and www.espnxgames.com. 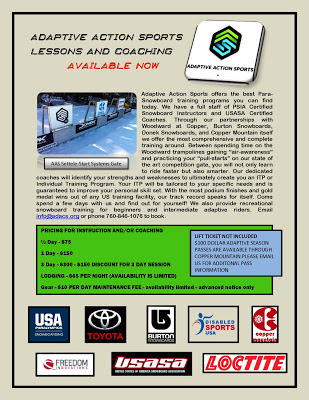 Adaptive Action Sports offers the best Para-Snowboard training programs you can find today. We have a full staff of PSIA Certified Snowboard Instructors and USASA Certified Coaches. Through our partnerships with Woodward at Copper, Burton Snowboards, Donek Snowboards, and Copper Mountain itself we offer the most comprehensive and complete training around. Between spending time on the Woodward trampolines gaining “air-awareness” and practicing your “pull-starts” on our state of the art competition gate, you will not only learn to ride faster but also smarter. Our dedicated coaches will identify your strengths and weaknesses to ultimately create you an ITP or Individual Training Program. Your ITP will be tailored to your specific needs and is guaranteed to improve your personal skill set. With the most podium finishes and gold medal wins out of any US training facility, our track record speaks for itself. Come spend a few days with us and find out for yourself! We also provide recreational snowboard training for beginners and intermediate adaptive riders. Email info@adacs.org or phone 760-846-1076 to book.