Travis Pastrana talks to Adaptive Action Sports, kicking off "We Adapt," a new series of monthly interviews with top athletes.

As we carefully pushed pyramids of swag-filled boxes stacked on top of our skateboards, Kep and I could already feel the energy building.  We were passing the Staples Center, heading towards Nokia Square and the Adaptive Action Sports booth at ESPN X Games 17.  Two hours later, the gates opened and the general public poured in. The X Games Village became a bustling metropolis that hummed with anticipation.  In true “Taco-Bell” and “X” style, the machine that is ESPN quickly got a single phrase “trending” through the thousands attending: “PASTRANA-THON!”

Travis Pastrana, one of the undisputed heavy-weight champions of X Games, was gearing up to do something unprecedented. The plan was to compete in Moto X Best Trick on Thursday (the first night of X Games), throw down in Moto X Freestyle on Friday night, fly to Indianapolis to drive in his first NASCAR race ever on Saturday and fly back to Los Angeles in time to compete in RallyCross on Sunday.

Seriously! That was his plan.

If anyone could have done it, it would be Travis.   However, with an unfortunate “twist” (pun intended), Travis nixed the “Pastranathon” by under-rotating a trick that has eluded him for two years at X Games: the 720.

The crash resulted in more than 20 fractures in 8 bones from his tibia through his ankle and into his foot. Obviously that would mean that Travis would be done for the weekend….right?

In true Pastrana fashion, he shocked everyone on Saturday by driving onto the X Games RallyCross practice course. Embodying the “We adapt” AAS truism, Team Travis worked all night to install a hand control system in his race car to give him the opportunity to compete.

I had the unbelievable honor of interviewing Travis Pastrana after his amazing appearance in RallyCross at X Games 17.

Thanks for the time Travis, and heal up soon.

Dan Gale:  What is it about being an action sports athlete that appeals to you the most?

Travis:  Riding a motorcycle is what I’ve loved to do since I was 4 years old and my parents used to take me trail riding every weekend.  The sports have evolved, but I enjoy that the mindset has remained the same. . . . Push the boundaries of what’s possible for yourself.  If you push yourself far enough, before you know it, you are pushing not only your own boundaries but also the limits of what others believe to be impossible. . . and that’s where it really gets exciting!

Dan:   Have you ever competed in team sports?  If so, what’s the difference between action sports and team sports?

Travis:  Every sport is essentially a team sport and I’ve yet to see anyone succeed without close friends or family or some sort of team supporting them.  The difference is that, in action sports, when game day comes around, the ball is always in your hands. Good, bad or indifferent, the result is ultimately in your hands.

Dan:   What is the scariest moment in your life?

Travis:  Anytime I’m unprepared to do my job.  If you know what to do and you are aware of the risks, no matter how daunting the task, you have weighed risk to reward and determined it is worth it.   I guess that could also be applied to not being in control. I get nervous a lot for my friends when we film nitro circus, especially when the risk to reward doesn’t add up in my head.

Dan:   What inspires you?

Travis:   People who do what they are passionate about, no matter what criticism or obstacles stand in their way.

Dan:   Our athletes “adapt” in order to participate in action sports. We have found that, with the right amount of forethought, anything can be accomplished. During the X Games you had an injury that made you sit out Moto X Freestyle but you “adapted” to your injury and still competed in the RallyCross. Can you tell us a bit about that; what it was like to have to adapt?

Travis:  Athletes in any sport find themselves constantly adapting to injury. Two days before X Games I tore the flexor tendon from my middle finger off the bone.  Without use of my middle finger and without time for surgery, we simply taped my middle finger to the pointer finger.  This was a minor adaptation but it meant less fingers to hold onto the bar and an extra finger working the clutch.

After best trick, my rally team and I were forced with a much bigger adaptation.  With more than 20 fractures in 8 bones from my tibia through my ankle and into the foot, there was no quick fix. The thought process though was simple: can we find another way to work the throttle? Could I learn how to use the new method of hand controls fast enough to be competitive and also not be a danger on the track? Could I tolerate the pain . . . especially knowing I wouldn’t be able to use any pain killers or even most over the counter medication due to safety and event rules.

I decided it was worth a shot and the team worked all night to get the car ready. Hand controls were installed.  Was it ideal? No.  Did I win? No.  Was it an amazing experience both for me and the team? Hell, yes.

Dan:   Have any of the injuries you’ve had over the years left residual effects? Do you have any injuries that have made you adjust or “adapt” full time?

Travis:  Yes, my right knee doesn’t bend past 90* and my left shoulder falls out of socket when it goes over my head.  I have to adapt my tricks accordingly.

Dan:   Other than the fact that you are a robot superhuman, how do you lessen your recovery time?  What things – like consistent practice, cross training and or diet – do you use to recover?

Travis:  The day you stop moving is the day you die. The body will recover stronger and faster than any doctor will credit if you just put in the work to make it happen.

Dan:   Can you offer any encouragement or keys to success to the segment of the “adaptive” community (including our injured veterans) who are, or may want to, participate in “action sports” within a safe environment like our Adaptive Action Sports programs or the DirtFish Rally School?

Travis:  If you think you can, you can!
Don’t let anyone tell you different!

On July 12-13, three injured Veterans had the opportunity to skid and tear their way across coarse terrain as guests at a two-day training donated to Adaptive Action Sports, Inc., by the DirtFish Rally School (www.dirtfish.com) in Snoqualmie, WA. 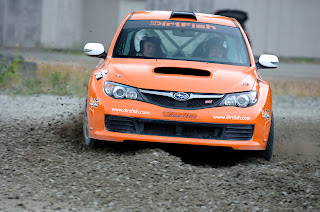 The training was a kick-off event in an AAS rallycross train-and-race series called “Stay on Track.”  The series, which will eventually be open to permanently disabled Veterans and non-Veterans alike, was inaugurated as  part of a new  Veteran-specific AAS program called “Veterans in Action.”


The AAS mission is to provide opportunities for permanently disabled individuals to participate in Action Sports, such as skateboarding, snowboarding and rally racing. “In 2010, we were able to expand our existing Action Sports programs to include a Veterans-in-Action focus,” explains Daniel Gale, Executive Director of the nonprofit AAS.  “Our first two Veterans Learn to Ride and Race snowboard camps, held in 2011, were very successful.  From these camps, we learned that ‘getting back in action’ is the preferred means by which many injured military personnel successfully cope with their disabilities.  This was the stimulus for our Stay on Track program.” 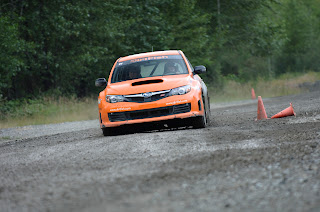 The rally camp was held at DirtFish Rally School, North America’s premier rally training facility. DirtFish’s 315-acre property offers a unique learning environment.  “None of the Vets attending this inaugural program knew quite what to expect,” says Gale, “but undeniably they were pleasantly surprised by the experience. With mud, gravel, and dirt surfaces peppered among abandoned warehouses and buildings, DirtFish offered the Veterans a dramatic setting in which to learn how to race a car.”

Clinton Okada, a single below the knee amputee, was one of the Veterans who attended. “This was one of the most memorable experiences of my life,” Okada said of the two-day intensive training.  He was accompanied by his fellow “battle buddy” John Beaver.

Beaver and Okada were together when Okada lost his leg in Afghanistan. Their vehicle was exploded by a deep-buried IED that created a chaotic scene.  Although injured himself, Beaver earned a second Purple Heart by pulling Okada to safety with the help of another soldier.

“It was great to share this with Clinton,” said Beaver adding “I will think of this when I think about Okada instead of battle.” (Watch the official AAS DirtFish video on www.adacs.org to hear more about their story.)

Injured Vet Brad Steensma was also on hand for the AAS Dirtfish training. On the second day of camp, Okada, Beaver and Steensma participated in a friendly timed-race with Steensma coming out on top.  As a result, Brad was given the opportunity to attend X Games 17 on July 31st to watch the RallyCross event live.  As part of his prize, Brad also had the opportunity to meet top drivers Dave Mirra, Robbie Maddison and Tanner Foust. To top off his experience the above PSA (Video), in which Brad appears, was aired live on site just minutes before the Rallycross Finals.

“I can’t thank AAS enough for this whole experience: from the DirtFish Rally School training all the way to X Games.  I’d do it again in a second” said Steensma. 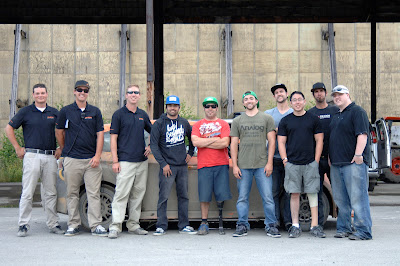 “We’re thrilled to support Adaptive Action Sports in its mission,” said DirtFish President, Ross Bentley.  “We’re really looking forward to working with the adaptive drivers that AAS represents.  We can give them a great foundation of skills on their quest to be professional rally drivers.”

DirtFish offers a range of training programs for all levels of drivers.  In addition to many passionate thrill seekers, DirtFish has also worked with action sports stars like Dave Mirra and Shaun White.

AAS would like to say thank you to all of the sponsors that supported this event including DirtFish, Freedom Innovations, Udo's Oil "Oil the Machine", Coal Headwear, Contour Cameras and Bradley Scott Films.